We finally have a number of retro refrigerator brands to choose from.

There are a few brands that absolutely dominate the market. They pack modern features and amenities, and charge a premium for their luxurious products.

But, thanks to a growing mainstream acceptance of the retro style, there are a number of other companies recently getting into the market and creeping up in popularity.

These newer retro refrigerator brands serve people on a lower budget, or looking for the “simplicity” of the retro style, rather than its “glamour.”

In this article, I'll introduce you to the major players in the retro refrigerator market, so you can get a good sense of what's available, and find something to fit your style, needs, and budget.

At the upper end of the spectrum you'll find the retro refrigerator brands that rank at the top of the search engines and appear in the most ads.

Elmira got its start back in the 1970s with, as you might guess from the company name, stoves. People liked their full line of gas and electric ranges with traditional styling and modern features.

They later added refrigerators, wall ovens, microwaves and dishwashers, and later 1950’s-styled fridges to its 1890’s-styled appliances, known as its Northstar line.

The Northstar line has expanded to include refrigerators, keg fridges, ranges, range hoods, splashbacks, microwaves and dishwashers – an impressive offering of twenty-three models in total!

Big Chill started with a fridge. Just one for a friend's vintage beach house. It was a 1950s era-inspired look, but with modern performance. Somebody else saw it and bought it, and then it became a business.

Big Chill took curves and colors inspired by cars and kitchens of the 50s, brightened them for an even bolder take, and made them part of their Retro style.

They have since expanded from their 1950s retro style to make a more early century Classic line, and a Pro Line. Big Chill product lines include fridges, oven ranges & stoves, microwave ovens, and dishwashers.

Smeg is an Italian home appliance manufacturer based in Guastalla, Italy with subsidiaries worldwide.

In the 1950s, Smeg launched one of the first gas cookers with an automatic switch-on function, and later, their laundry and dishwasher range was launched.

In the 1990s, they added more product lines, including sinks, hoods, and colored retro 50s refrigerators, which are now the iconic items we see all over the Internet.

Just because they're not “luxury” brands, doesn't mean these retro refrigerator brands skimp on the modern features and amenities. These brands will be closer to the price range of average modern refrigerators.

The original Chambers brand began in 1910 with a fireless cooker gas stove. The Chambers brand continued to add unique functionality to its cooking products including an early version of a slow cooker, smokeless broiler and griddle.

After several acquisitions and changeovers, the Chambers company stopped manufacturing, but it had a loyal following of customers who value their high quality and performance.

Chambers is now resurrected in North America with a line of retro-style refrigerators boasting a number of luxury and energy-saving features. It has a few sister-brands around the globe, including “Caloric” in Canada, and “Gorenje” in the UK and other parts of the world.

Galanz Americas is a subsidiary of Galanz Enterprises, a China-based home appliances manufacturer. They make a range of products, including toaster ovens, microwave ovens, blenders, refrigerators, and more.

Their Retro Series includes a microwave oven, and a number of refrigerators ranging from 3 cu. ft. up to 12. Galanz products are priced affordably and available at online retailers globally.

Unique Appliances originally modernized the off-grid kitchen with battery ignition propane ranges and solar-powered DC appliances, all with modern design. Unique still is the only off-grid manufacturer to offer matched pairs of propane fridges and ranges in North America.

Unique’s innovations include refrigerators that directly vent all combustible gases externally (and, those that don’t feature a fail-safe carbon monoxide shut-off valve) and the first battery operated ignition system in ranges (saving the fuel usually wasted with standing pilots).

I'm using “vintage” to describe a style of retro refrigerator that is a bit older in style that what you might have seen in the 1950s. Let's say “early 20th Century”…

Heartland appliances combine nostalgic craftsmanship, and a style more classic than retro—reminiscent of the 1890s rather than the 1950s…

Looking for more? See Retro Refrigerator Reviews on this site.

This article could use a few of the latest (and even more lesser-known) retro refrigerator brands on the list. Help me out!

What brands are new to the industry? Which ones are your favorites? Please add to the list using the comments below!

I put together this list of affordable full-size retro refrigerators … 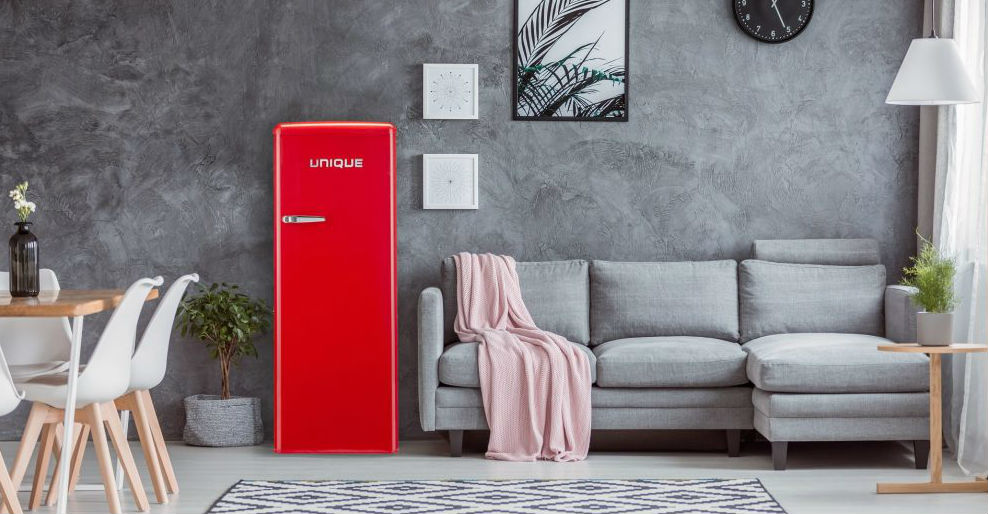 If you've spent any time online looking for a good …

Instead of an expensive retro refrigerator with an ice maker, …